SPECIAL OFFERS | REVIEWS | IN AND AROUND | EVENTS | FOTO | NEWS |
PESCINA COMUNE OF L'AQUILA IN ABRUZZO: 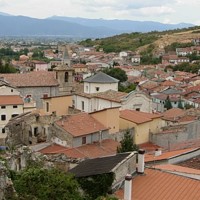 Pescina is a comune (municipality) in the Province of L'Aquila in Abruzzo, Italy. Elevated in town with the Decree of the President of the Republic in 2001, is part of the club of the Authentic Borghi of Italy

The town of Pescina is located in the Fucino area along the Giovenco valley. Its territory is included in the natural park of Sirente-Velino, while the south-eastern slope falls into the outer delimitation area of ​​the Abruzzo, Lazio and Molise national parks.

Not to be missed:

Basilica of Santa Maria delle Grazie of the 16th century was the mother church of the Marcian diocese
Church of San Berardo
The San Francesco Theater in via Sant'Antonio, in the oldest part of the city, houses the silonian museum and center, the theatrical room and the conference room.
The structure, over 200 places, has been restored to the design of architect Carlo Scoccia.
Giulio Mazzarino's Birthplace
Today, the museum's headquarters are dedicated to the cardinal.
The home of Ignazio Silone is located in the oldest part of the village.
School building "Angelica Sgobbo Sipari".
Archaeological sites Grotta Tronci at the doors of Venus of the Marsi, as a result of study, excavation and research, numerous countless finds have come to light. From the most varied cobblestone tools with engravings and splinters to fragments of animal bones. These findings would indicate the presence and continuation of man's occupation in these places as early as the Paleolithic period, some 18,000 years ago. Not far away lies the little cavity called Maurizio's Lodge.