SPECIAL OFFERS | REVIEWS | IN AND AROUND | EVENTS | FOTO | NEWS |
SAN VITTORINO OF L'AQUILA: 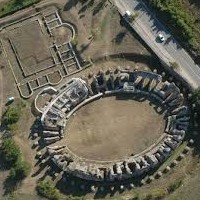 San Vittorino is a fraction of the municipality of L'Aquila, located about 8 km northwest of the capital.
It is known for the presence of early Christian catacombs in the underground of the church of San Michele Arcangelo, which is the patron saint of the village.

The origins of San Vittorino are connected to those of the Sabina city of Amiternum, whose remains (particularly the amphitheater and the Roman theater) are still clearly visible on the plain below the village.
In antiquity, the city developed directly on the hill where the present-day residential area of ​​San Vittorino is located, and only later, at the beginning of the imperial age, moved more downstream.

In the archaeological area of ​​Amiternum we find in addition to the amphitheater and theater of the Augustan age, a villa of late imperial age, with mosaics and frescoes, spa remains and an aqueduct dating back to the age of Augustus.
Not to be missed is the early Christian church of San Michele Arcangelo, which is located in the village, an ancient monument based on Romanes dating back to the fifth century and famous for its crypt containing the supposed tomb of San Vittorino di Amiterno.